The economics of transitioning to digital media markets

The transition from traditional media markets to digital markets was one of the dominant threads of discussion during last week’s conference.

Executives from traditional media firms who are trying to manage this transition disagreed on the best approach. This was not surprising given the complexity of the problems they face.

Here are three pictures that illustrate some of the challenges for firms that operate in multiple media markets. This first picture shows traditional markets on the left, channels might be print, or radio and television, either broadcasting or cable.  Firms earn revenue from advertising, subscriptions, or a combination of the two.
Firms face a downward sloping demand curve because an increase in price reduces the amount of advertising or subscriptions they sell, and vice versa.  The shaded rectangle is the amount of revenue the firm generates (price x quantity  = total revenue).


On the right is a digital market where the channel might be a website on the Internet. The firm faces a downward sloping demand curve, but prevailing prices are much lower. The firm is forced to charge a fraction of its price in the traditional market.  The online audience is much larger but the total amount of revenue, shown by the shaded box, is much smaller.
Prices are lower in the digital market because of the volume of identical or close to identical media content – audiences easily can switch to a substitute if the firm raises prices.  In addition, most online advertising revenue is generated on about 50 websites, according to the Interactive Advertising Bureau.  Everyone else competes for small shares of the remaining revenue. 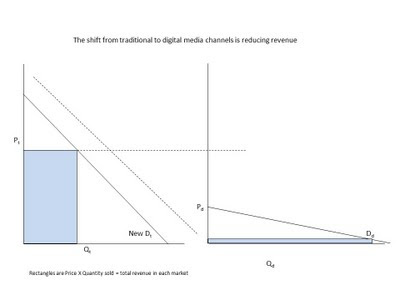 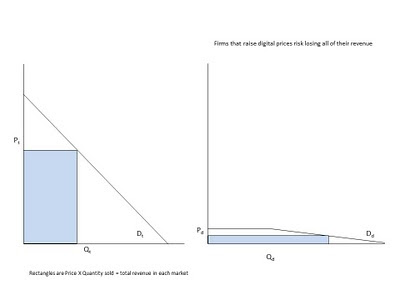 This last picture shows what can happen if a firm starts to raise digital prices because audiences find its content especially appealing.  Intense competition in the digital market might create a price ceiling, illustrated by the kinked demand curve.  When prices reach the flat portion of the demand curve, additional increases mean the firm will lose all of its customers.

The risk of this happening drives the debate about charging for access to websites.  That debate was present at the conference, and will be discussed in future postings.

But the larger point is that operating in different channels requires different strategies.  Three strategies were discussed at the conference.

One was a classic differentiation strategy - provide content tailored to the interests of different market segments – or niche audiences.


Another was a cost-reduction strategy.  Reduce costs by creating economies of scale, republish the same or similar content in different channels.  This is often referred to as convergence.
The third strategy is based on moving away from intensely competitive digital channels. Firms are trying to find less competitive channels where audiences and advertisers are more likely to pay for differentiated content.
Posted by Hugh J. Martin (@HughJMartinPhD) at 9:10 PM